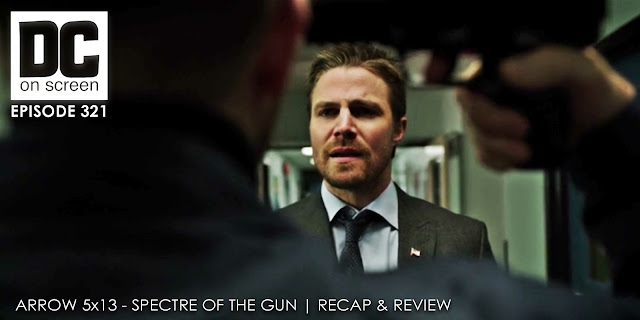 Download Arrow 5x13 - Spectre of the Gun | Recap & Review
 
SPOILERS/NSFW - DC on SCREEN #321 -  Arrow 5x13 - Spectre of the Gun | Recap & Review This week we take a look at Rene to see what created the Wild Dog we’ve come to know. There’s also a lot of talk about gun laws. But here’s what actually happened. In the present, Oliver is faced with a gun rights dilemma as a madman infiltrates city hall, killing several people and injuring many others. It comes to bear that his rage is over a gun registry bill that didn’t get passed, and the fact that his family was needlessly gunned down shortly after the bill died. In the wake of the city hall incident, Mayor Queen has to spend his time tracking down this domestic terrorist while also talking with opposition City Council members about how to draft a bill that will satisfy both sides of this debate. Team Arrow does track down the terrorist, but it’s Mayor Queen who talks him down and submits him to custody. With the help of Rene, who has been appointed Assistant Deputy Mayor to Lance, Oliver works up a bill that apparently protects everyone’s rights & opinions. In the flashbacks we learn that Rene once had a wife and a young daughter, but the wife was a recovering addict who got in a little deep. After returning with his daughter from a hockey game, Rene finds his wife held at gunpoint over a few hundred dollars of IOU drug money. Rene tries to get to the box with his gun in it, and does, but the dying drug dealer kills his wife with an incidental blow. Having been dishonorably discharged, Rene isn’t allowed a firearm and in the aftermath of the event his child is taken from him. He pleads with Child Protective Services, but to no avail. In the present, having learned of the situation, Curtis swears to help him get his daughter back. Meanwhile, Felicity is still using her illegally acquired database and Diggle talks Dinah into getting a real apartment and putting some roots down.