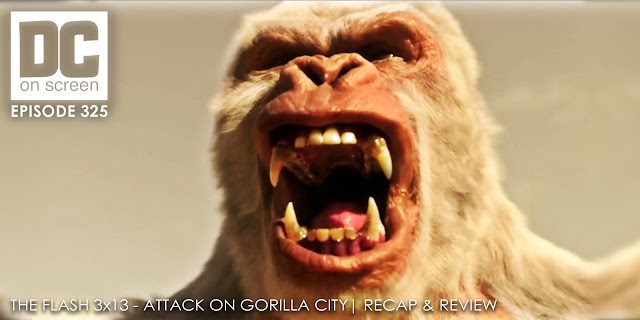 Download The Flash 3x13 - Attack on Gorilla City | Recap & Review
 
SPOILERS/NSFW - DC on SCREEN #325 - The Flash 3x13 - Attack on Gorilla City | Recap & Review Harry has been captured by Grodd on Earth 2 so Barry, Cisco, Caitlin and Julian set off to rescue him.  Barry demands Jesse Quick stay behind to help Wally protect Earth 1.  There’s initially some tension there between her and Wally, but in the end they work it out and Jesse realizes, with HR’s help, that she’s prepared to stay on Earth 1 with Wally.  On Earth 2, the gang immediately gets kidnapped, and it appears Grodd needed Barry to defeat Solovar for him in a gladiator-style battle.  Barry does, but refuses to kill Solovar, because humans are peaceful.  Grodd, who had promised the gang refuge, betrays them and promises instead to kill them to make a point.  With few options left, Caitlin freezes Barry just enough to make him appear dead so that Grodd will lose track of his dampening and pull him out of the cage.  Barry promptly warms up and saves everyone, including Harry.  They make a run for it, and vibe back to Earth 1.  But lo, the forward-thinking Grodd had a back-up plan, as it appears Gypsy is under his thumb and ready to open the doorway for a Gorilla invasion of Central City, fulfilling yet another prophecy.