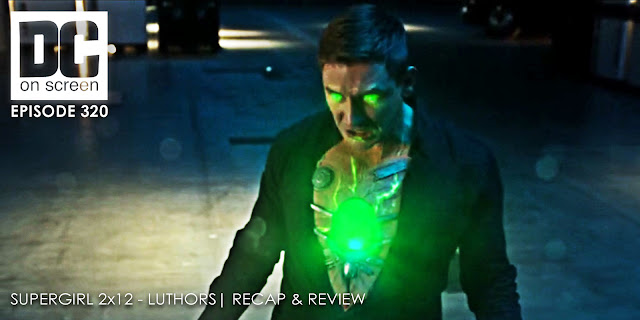 Download Supergirl 2x12 - Luthors | Recap & Review
 
SPOILERS/NSFW - DC on SCREEN #320 - Supergirl 2x12 - Luthors | Recap & Review This week was a glimpse into the past of Lena Luthor.  First off, it turns out she was an illegitimate spawn of Lionel’s who was brought into the family without the full support of Lillian.  Secondly, she’s apparently embarrassingly better at chess than the vaunted Lex Luthor, who it turns out was friends with Superman for years before the two became arch nemeses.  But this story is about the escape of Metallo and the teamwork between him, Cyborg Superman, and Lillian that ensues.  When Metallo escapes, Lena is left to blame and is summarily arrested.  Kara, however, is certain her friend wouldn’t do this.  It does eventually turn out that the damning footage of Lena was faked by Cyborg Super-Hank, which exonerates Lena.  Ultimately, a battle ensues between Supergirl and the CADMUS trio but the results are deadly for Metallo, whose use of synthetic Kryptonite are inevitably self-destructive.  Cyber-Hank and Lillian scuttle away and the Manhunter shows up in time to give Supergirl enough time to save Lena, but Metallo is supposedly a goner.  All the while, James and Kara have been talking and the relationship between Guardian and Supergirl may have a future, because they’ve talked about mutual trust now and game night is back on.  Also, Alex comes out to the gang, who are all happy for her but with varying degrees of not surprised.  And Kara finally faces her feelings for Mon el.  The two even kiss, almost, until a 5th dimensional imp shows up and steals the scene, declaring his love for Kara.