Legends of Tomorrow 2x10 - The Legion of Doom | Recap & Review 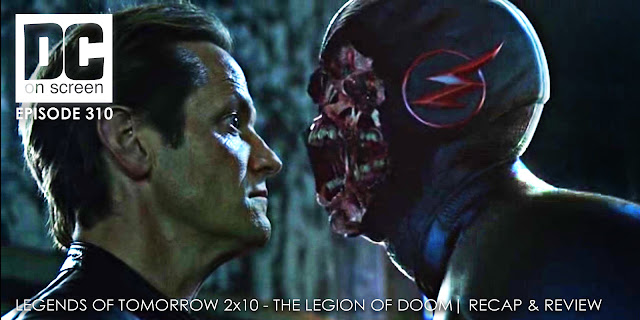  
SPOILERS/NSFW - DC on SCREEN #310 Legends of Tomorrow 2x10 - The Legion of Doom | Recap & Review This episode we get to see things from the Legion of Doom’s perspective, and the in-fighting is rampant.  Darhk and Merlyn can’t get any secrets out of Film School Rip because there are none to be had.  His brain has literally been reprogrammed.  This failure annoys Eobard, who admonishes them as he would henchmen.  Fed up with the sidekick treatment, Merlyn and Darhk trap Eobard in a vault and demand to be treated as equals.  It works, because it turns out the watch Eobard has been looking at is telling him how long he has before the Black Racer shows up to snag his soul.  After Eobard agrees to their demands, they use a similar trick to trap the Black Racer and make an escape.  Having bought some time, the trio head back with the prize of Rip’s safety deposit box, which is a memory disk.  They use it to reprogram Rip again, this time making him an assassin.  Meanwhile, Stein and Ray need help sciencing something and Stein calls in the foremost expert he can think of.  His daughter, Lily.  She’s a big fan of the Waverider, even if Sara is a little peeved she’s been brought there, but she does in fact help Ray plug Gideon up to a thousands-year-old amulet, which will hopefully help them find the rest of the spear of destiny before the Legion of Doom.  Unfortunately, Mick lets slip that she’s an aberration and Stein has to face the music on his feelings about having a daughter and Lily’s past.