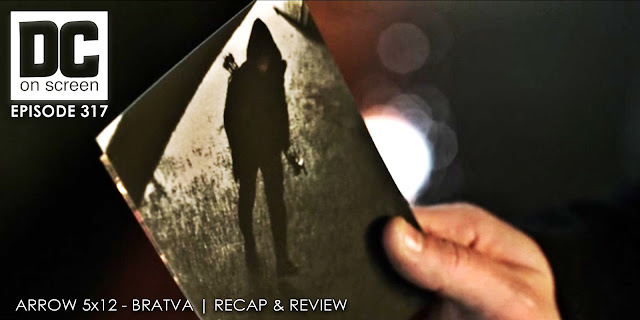 Download Arrow 5x12 - Bratva | Recap & Review
 
SPOILERS/NSFW - DC on SCREEN #317  - Arrow 5x12 - Bratva | Recap & Review Team Arrow heads to Russia to find General Walker and a big ol nuclear bomb. Oliver hopes Anitoli will help him find Walker, but Anitoli is pretty pissed about a previous commitment that Oliver dropped. A raid provides them a hostage, but Diggle gets impatient and knocks him right the hell out. Felicity takes matters into her own hands, and blackmails someone using the giant Pandora cache of info she was gifted. Rory is suspicious, and is worried about Felicity’s new direction in life. None of this works though, so Oliver is forced to barter with Anitoli and do some enforcing on behalf of the Bratva in exchange for Walker’s location. The trade off works, and they do capture Walker, but it appears Oliver may be more in debt to his old friend than he had hoped. Despite Felicity’s best hacking, the big ol nuclear bomb goes off, and Rory wraps it in his rags to contain the blast. His desperate tactic works, but at the expense of the magic contained in the rags, so he tells Felicity in private that he’s leaving and will return when he can be more use to the team. Back in Star City, Rene is left to help Quentin prepare for his interview with Susan. And also to make sure his ass stays sober. After some blustering, Quentin accepts Rene’s help. The interview goes more smoothly than it should because, it turns out, a young Lance once told a young Rene that he wasn’t living up to his potential. Susan meets a contact who gives her a photo of the old school Green Arrow that was taken in Russia. She can only conclude that the Bratva Captain Oliver Queen that she knows and the Green Arrow from the picture are one in the same.  In the flashbacks, Talia’s training of Oliver continues as they knock off a name from Oliver’s father’s list, and Talia pushes Oliver to continue his journey and take the fight back home.