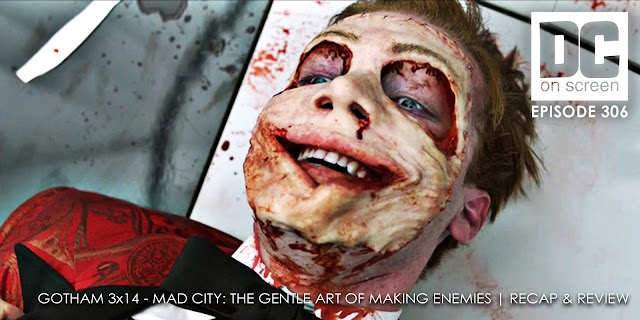  
SPOILERS/W - DC on SCREEN #306 Gotham 3x14 - Mad City: The Gentle Art of Making Enemies | Recap & Review
Jerome’s followers paint the town red as the city plunges into complete chaos, but Jerome has some unfinished business to attend to.  He storms Wayne mansion and kidnaps Bruce, who buys himself some time at least by appealing to Jerome’s sense of showmanship.  Jim catches on in time to save Alfred and the two take off after Bruce, whom they discover is at a carnival that’s now a Jerome stronghold.  Jim, Alfred and the cops arrive just in time to almost save Bruce, who just saves himself anyway.  Jerome follows Bruce into a house of mirrors where Bruce proceeds to beat his face nearly off his body.  Moments later, Gordon finishes the job.  Meanwhile the Penguin shows up hoping to save Edward but finds that he has been duped by the gang.  After mucking about with some death traps and trying to get Penguin to betray Ed for his own life, Ed reluctantly admits that Oswald does apparently love him, one way or another, but shoots him anyway.  Finally, Alfred and Bruce have a talk about what all this training is leading to and what rules he’ll need to abide by.