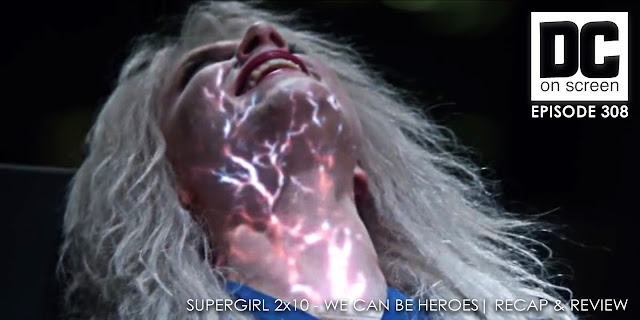 Download Supergirl 2x10 - We Can Be Heroes | Recap & Review

 
SPOILERS/NSFW - DC on SCREEN #308 - Supergirl 2x10 - We Can Be Heroes | Recap & Review Mon-El seems to be mostly battle ready, and Winn needs some sleep. Kara & Mon-El set out to track a recently sprung Livewire.  Mon-El screws up guarding some civilians, & Guardian has to put his neck out to save a bystander.  He gets knocked out, and Kara learns that Guardian is James Olsen.  This goes over poorly, and Kara swears she’ll stop him from risking his life.  He tells her “Good luck with that”.  It turns out that Livewire was abducted and not rescued though, and when Winn tracks her location, he lies to Hank and Supergirl and feeds the location to James to prove their worth.  Mon-El overhears the location & their plan, so he shows up to help.  Unfortunately, the scientist gets the drop on Guardian and Mon-El, and they get themselves captured, forcing Winn to come clean to Supergirl.  She shows up, releases everyone, and forms a temporary alliance with Livewire to stop the scientist. Supergirl even agrees to let Livewire have a running start before tracking her down again, just in case she’s decided not to be a villain anymore.  Even after fighting side by side though, in the aftermath, Kara just can’t agree to support James and Winn’s vigilantism and the 3 of them agree to work separately.  Meanwhile, Hank has to save M’gann’s life after she appears to collapse in her cell.  After much reluctance, he mind melds with her and talks her out of her guilt, which stops her mind from shutting itself down.  The two reemerge as friends and she warns Hank that it was a psychic attack that shut her down, and the White Martians are coming.  Also, Mon-El tells Kara how he feels and gets shut down hard.