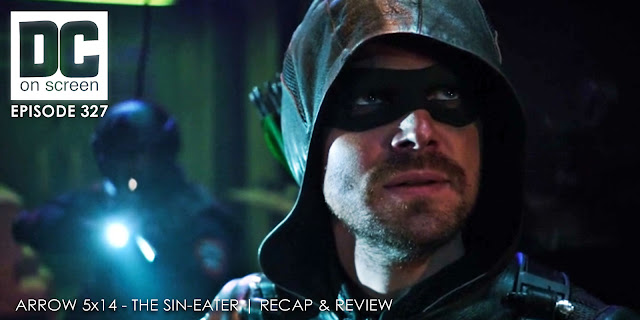 Download Arrow 5x14 - The Sin-Eater | Recap & Review
 SPOILERS/NSFW - DC on SCREEN #327 - Arrow 5x14 - The Sin-Eater | Recap & Review China White, Liza Warner and Cupid have busted out, and they want the nest egg Tobias Church stashed away from his Amertek deal. Green Arrow and the team set out to stop them, but find the ACU and Captain Pike are even more eager to shut down Green Arrow, whom Pike has just learned from an anonymous tip, is the real killer of Billy Malone Now. Also, Susan straight up asks Oliver if he is the Green Arrow, and he laughs it off. As a result of the close encounters, Oliver barely escapes an assault by the ACU and Thea lights Susan’s career on fire, which is an overstep that she and Oliver talk about later. Mayor Queen has a talk with Pike about elicit information he has received from the Green Arrow concerning the death of Detective Malone, and convinces Pike that it was ultimately the work of Prometheus. Team Arrow figures out where Liza, China White, and Cupid are heading next, and tries to stop them. It would appear they are hamstrung by the ACU’s arrival, but Pike has taken Mayor Queen’s advice, and instead the squad takes the 3 women into custody. During this time, Lance learns a lesson about taking too much responsibility for other people’s actions, Curtis tries on a new suit, and Dinah learns there’s a difference between taking someone’s place and carrying on in their place. Back in a hospital in Russia, Oliver notices a spy, and tries to escape with his and Anatoli’s life.
at February 26, 2017
Email ThisBlogThis!Share to TwitterShare to FacebookShare to Pinterest
Labels: 5x14, arrow, dc comics, podcast, recap, review, the sin-eater