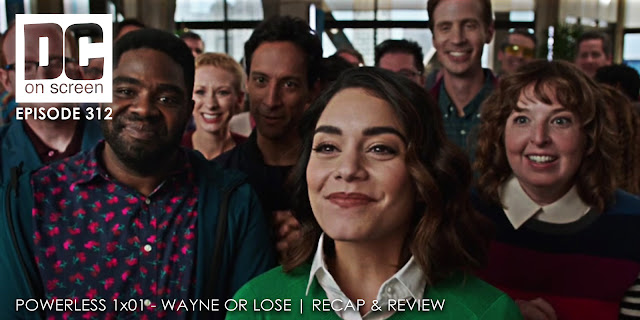 Emily is late for her new job at Wayne Security when a battle between Crimson Fox and jack O Lantern derails her train.  She seems to be the only person interested as people in Charm City see this kind of thing every day.  Emily once had a monotonous job at an insurance company in a fly-over state (a state where superheroes fly over but never stop).  Now she's off to make a difference in an office with a bunch of quirky inventors who are quirky and make products like the Joker anti-venom epipen. Except, none of their ideas are very good, and neither are the bosses Bruce Wayne's cousin Van has hired to corral and inspire these people. Emily is the latest in a long line.  Oh, and Van? Hoping to leave the taint that is Charm City.  He gets his chance when his batty cousin gives him a call and tells him Wayne Security is closing down. Van is excited to learn he'll get his chance to be absorbed into the Gotham office until Emily does her job and introduces a supervillain detection device that Bruce loves.  Bruce keeps everyone aboard, Van is stuck in Charm City, and Emily has won the respect of her colleagues.